Belgian Association for Tennis Development Since 1989

About us
Organization
Feedback

In search of a solution to manage your tennis club and/or school?

We offer you more than 30 years of experience dedicated to Tennis !

BATD, the Belgium Association for Tennis Development, founded in 1989, is a private association dedicated to Tennis promotion in Belgium at all levels.

Our strengths:
PASSION and PROFESSIONALISM

Tennis at all levels
The BATD Tennis Programm promotes teaching methods adapted to each age. Mini-Tennis starts as early as 3 years old with baby tennis. 12m Mini-Tennis and 18m Mini-Tennis are the two next steps.

12m Mini-Tennis
The children discover different physical aspects of themselves - dexterity, coordination, speed, relaxation, endurance, rythm. The goal is to use a complete approach to racket sports and to master particular skills, such as balance, trajectories and the playing space.

18m Mini-Tennis
The children play proper rallies with an intermediate ball where he or she practices, compares him/herself to others, copies and increasingly understands different aspects of the game. The goal is to focus on the outcome of their game and make that more of a priority; 18m Mini-Tennis is the last stage before passing on to a normal-sized 24m court. The evolution takes place naturally as the racket, the ball and the court have all grown progressively during the child's apprenticeship. 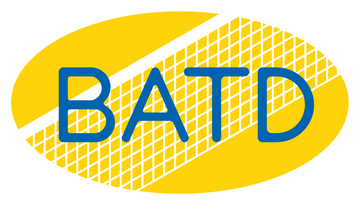